Ahh, a revival of a classic pattern…my favorite. I’ve been a fan of herringbone for quite a while now. It’s very exciting to see this pattern popping up everywhere these days. Especially in carpets…a herringbone carpet is up their with sisals for me. The herringbone pattern resembles the skeleton of a fish (hence the name). It’s becoming a regular on the runway and catching the attention of both men AND women. Fall 2015 will be the season for this timeless pattern. Can’t wait until then? Check out this herringbone carpet we recently installed on a set of stairs!

A herringbone carpet is an awesome way to set a certain part of your space apart from the rest. Herringbone can sometimes get confused with a chevron pattern. While they look very similar, there is a difference. Herringbone has breaks at each section, whereas chevron is a continuous zigzag. Herringbone has a distinctive V shape and Chevron is a repeated pattern of W shapes that connect along a straight line. There are many variations, which is why they can get confusing.

Here are some chevron patterns. Can you tell the difference between a herringbone and chevron carpet? 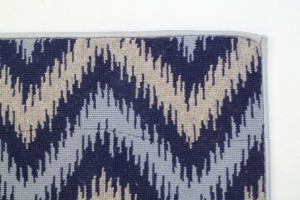 The herringbone pattern can be used in other places of your home too. You can find the pattern in certain woods, tiles, or bricks. And those are just a few ideas! Where would you like your herringbone?